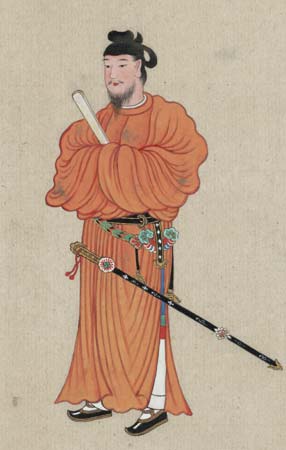 (聖徳太子 Shōtoku Taishi?, 573–621), also known as Prince Umayado (厩戸皇子 Umayado no ōji?),太子 = Taishi = Crown Prince or Statesman . Umayado which means “door of stable.” He was given that name because his mother, Empress Anahobeno-hashinohito, gave birth to him in front of the stable door, thus, his name. He was a regent and a politician during the Asuka period in Japan.

Sushun, who was the Uncle of Umayato and a brother of Emperor Youmei and Suiko, took over the throne after Emperor Youmei passed away. Since he did not like Umako’s despotic behavior, he was assassinated by Umako, who was his uncle. Prince Umayato’s aunt became Empress Suiko in 592 A.D. after a competition for the throne between the Soga family and the Mononobe family was settled.

Umayato started to work as a regent and conduct the affairs of state under Empress Suiko. His Great Uncle was Umako Soga, a minister of state. Umako was also Empress Suiko’s uncle. Prince Umayato got married to Tojikono-iturame, who was the daughter of Umako. (**In this period, men tended to have more than one wife.**) She gave birth to a son whose name was Prince Yamashiro. However, in 643 A.D., Yamashiro was killed by Iruka Soga, who was a cousin of Yamashiro and a grandson of Umako. An assassination of relatives for the throne was not a rare occurrence in this period.
Prince Shotoku sent the first envoy to Sui Dynasty in China, he established an official rank and a constitution and spread Buddhism. He built two famous temples in Japan, the Shitenno-ji in 593 A.D. and Horyu-ji in 607 A.D. He achieved many things before his death from illness in 622 A.D.

(He was born of emperor Youmei and one of his wive’s, Empress Anahobe-hashinohito. He had 4 brothers and one sister. Since successive emperors could have more than one wife in ancient times, the oldest brother of Prince Umayato had a different mother. However, his younger brothers and sister had a different father, who was the oldest brother of Prince Umayato.)

The Seventeen-article constitution (十七条憲法 jūshichijō kenpō?) is, according to Nihon Shoki published in 720, a document authored by Prince Shōtoku in 602. It was adopted in the reign of Empress Suiko. The emphasis of the document is not so much on the basic laws by which the state was to be governed, such as one may expect from a modern constitution, but rather it was a highly Buddhist document that focused on the morals and virtues that were to be expected of government officials and the emperor’s subjects to ensure a smooth running of the state, where the emperor was to be regarded as the highest authority. It is one of the earliest moral dictatorial documents in history.

I. Harmony is to be valued, and an avoidance of wanton opposition to be honored. All men are influenced by class-feelings, and there are few who are intelligent. Hence there are some who disobey their lords and fathers, or who maintain feuds with the neighboring villages. But when those above are harmonious and those below are friendly, and there is concord in the discussion of business, right views of things spontaneously gain acceptance. Then what is there which cannot be accomplished!

IV. The Ministers and functionaries should make decorous behavior their leading principle, for the leading principle of the government of the people consists in decorous behavior. If the superiors do not behave with decorum, the inferiors are disorderly: if inferiors are wanting in proper behavior, there must necessarily be offences. Therefore it is that when lord and vassal behave with propriety, the distinctions of rank are not confused: when the people behave with propriety, the Government of the Commonwealth proceeds of itself.

V. Ceasing from gluttony and abandoning covetous desires, deal impartially with the suits which are submitted to you. Of complaints brought by the people there are a thousand in one day. If in one day there are so many, how many will there be in a series of years? If the man who is to decide suits at law makes gain his ordinary motive, and hears causes with a view to receiving bribes, then will the suits of the rich man be like a stone flung into water while the complaints of the poor will resemble water cast upon a stone. Under these circumstances the poor man will not know where to take their complaints. Here too there is a deficiency in the duty of the Minister.

VI. Chastise that which is evil and encourage that which is good. This was the excellent rule of antiquity. Conceal not, therefore, the good qualities of others, and fail not to correct that which is wrong when you see it. Flatterers and deceivers are a sharp weapon for the overthrow of the State, and a pointed sword for the destruction of the people. Sycophants are also fond, when they meet, of dilating to their superiors on the errors of their inferiors; to their inferiors, they censure the faults of their superiors. Men of this kind are all wanting in fidelity to their lord and in benevolence towards the people. From such an origin great civil disturbances arise.

VII. Let every man have his own charge and let not the spheres of duty be confused. When wise men are entrusted with office, the sound of praise arises. If unprincipled men hold office, disasters and tumults are multiplied. In this world, few are born with knowledge: wisdom is the product of earnest meditation. In all things, whether great or small, find the right man, and they will surely be well managed. On all occasions, be they urgent or the reverse, meet but with a wise man, and they will of themselves be amenable. In this way will the State be lasting and the Temples of the Earth and of Grain will be free from danger. Therefore, did the wise sovereigns of antiquity seek the man to fill the office, and not the office for the sake of the man.

VIII. Let the Ministers and functionaries attend the Court early in the morning and retire late. The business of the state does not admit of remissness and the whole day is hardly enough for its accomplishment. If, therefore, the attendance at Court is late, emergencies cannot be met. If officials retire soon, the work cannot be completed.

X. Let us cease from wrath and refrain from angry looks. Nor let us be resentful when others differ from us. For all men have hearts, and each heart has its own leanings. Their right is our wrong, and our right is their wrong. We are not unquestionably sages, nor are they unquestionably fools. Both of us are simply ordinary men. How can any one lay down a rule by which to distinguish right from wrong? For we are all, one with another, wise and foolish, like a ring which has no end. Therefore, although others give way to anger, let us on the contrary dread our own faults, and though we alone may be in the right, let us follow the multitude and act like them.

XI. Give clear appreciation to merit and demerit and deal out to each its sure reward or punishment. In these days, reward does not attend upon merit nor punishment upon crime. All you high functionaries who have charge of public affairs, let it be your task to make clear rewards and punishments.

XII. Let not the provincial authorities or the Kuni no Miyakko levy exactions on the people. In a country there are not two lords; the people cannot have two masters. The sovereign is the master of the people of the whole country. The officials to whom he gives charge are all his vassals. How can they, as well as the Government, presume to levy taxes on the people?

XIII. Let all persons entrusted with office attend equally to their functions. Owing to their illness or to their being sent on missions, their work may sometimes be neglected. But whenever they become able to attend to business, let them be as accommodating as if they had cognizance of it from before, and not hinder public affairs on the score of their not having had to do with them.

XIV. All you ministers and functionaries! Be not envious. For if we envy others, they in turn will envy us. The evils of envy know no limit. If others excel us in intelligence, it gives us no pleasure; if they surpass us in ability, we are envious. Therefore, it is not until after a lapse of five hundred years that we at last meet with a wise man, and even in a thousand years we hardly obtain one sage. But if we do not find wise men and sages, how shall the country be governed?

XV. To turn away from that which is private, and to set our faces towards that which is public – this is the path of a Minister. Now if a man is influenced by private motives, he will surely feel resentments, and if he is influenced by resentful feelings, he will surely fail to act harmoniously with others. If he fails to act harmoniously with others, he will surely sacrifice the public interests to his private feelings. When resentment arises, it interferes with order, and is subversive of law. Therefore, in the first clause it was said that superiors and inferiors should agree together. The purpose of that first clause is the same as this.

XVI. Let the people be employed (in forced labor) at seasonable times. This is an ancient and excellent rule. Let them be employed, therefore, in the winter months, when they are at leisure. But from Spring to Autumn, when they are engaged in agriculture or with the mulberry trees, the people should not be so employed. For if they do not attend to agriculture, what will they have to eat? If they do not attend to the mulberry trees, what will they do for clothing?

XVII. Decisions on important matters should not be made by one person alone. They should be discussed with many. But small matters are of less consequence. It is unnecessary to consult a number of people. It is only in the case of the discussion of weighty affairs, when there is a suspicion that they may miscarry, that one should arrange matters in concert with others, so as to arrive at the right conclusion.”

5 Replies to “The prince of virtue”