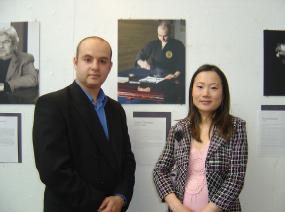 A capacity audience was on hand to participate in the unveiling of the photography which lined the walls of the hall. A professional classical musician seated behind a grand piano set the mood while attendees walked around, familiarizing themselves with the subjects and their stories. Shortly after 12:30pm, organizers shared with attendees the exhibit’s objective and the seven month process required to interview, photograph, and produce the final product. 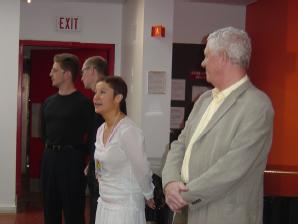 Sensei Eduard’s bio spoke of his early years in the Ukraine, Israel, and finally in Canada where, as one of the world’s highest ranked Ninpo masters, he now runs a school of over 50 students.

As a featured subject of Faces of Jewish Toronto, Sensei Eduard is in good company. Some of the notable individuals profiled include: a Nuclear Physicist originally from Egypt; one of Toronto’s best known Jewish recording artists; a CBC newscaster and producer during the Second World War; a celebrated Rabbi who has written over 20 books; an eleven year member of the Toronto Symphony Orchestra; and an architect graduate from Waterloo university originating from Istanbul, Turkey.

The exhibition is on display from June 11 to June 29 2006 at the Loggia Bathurst Jewish Community Centre in Toronto.